Summer on the road across Canada

It’s something I’ve wanted to do for a long time, but always tied down by stupid boys and work. I quit the stuffy software job in April during the hardcode lockdown period, and didn’t look back. I bought a used car and started planning the trip across.

For all of July I bounced around Ontario parks, to return to Toronto to finish the tattoo. Almost an entire month in provincial parks was fantastic but also illuminating in terms of other humans. They’re gross. Unbelievable amounts of garbage and entitlement. I’ll leave it at that. It was sometimes difficult to get a spot for weekend nights – akin to buying tickets for popular concerts. The Ontario parks website is not made for that level of refreshing. I still ended up with a place to park the car and setup the tent. For a few days I also went to Ottawa to visit sister and her partner. It was nice to be indoors for a bit, but I really missed the outdoors.

Starting at the end of July, immediately after getting fresh ink, I bounced the heck out of Ontario. I stayed at the following parks for one night: Sturgeon Bay, Lake Superior, Silver falls, and Sioux narrows. I’ll refrain from using the word ‘regret’, but it was pretty close for Silver falls. A long dirt road, and totally a ‘seasonal trailer’ kind of place. The highlight was the generator turned on at around 23:30 so the occupants could watch a movie. But hey I’m the outsider here, in my tiny little tent for one night. Most nights I had to filter the water anyways, despite it being a tap at a park. Silver falls warned me that I’d be getting from the lake, but I didn’t really expect to filter the entire time. Showers also remained closed. Sometimes I wondered what I was really paying full price for, beyond keeping the staff employed. They were all enjoyable experiences regardless. Sioux narrows was the best one of the bunch there. 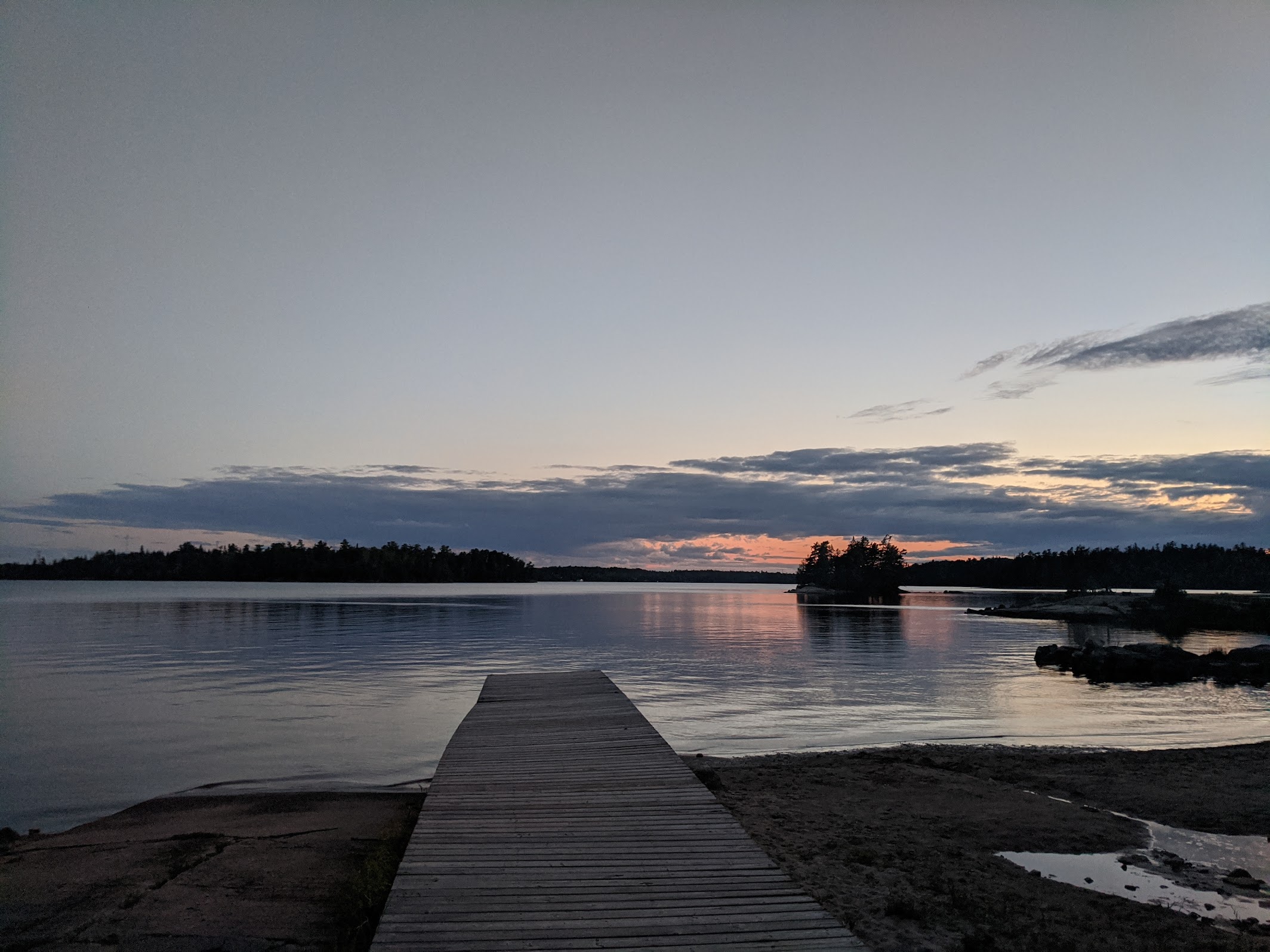 Due to travel restrictions remaining in Manitoba, I wasn’t able to stay there at all. Luckily it’s ‘only’ an eight hour blast through the entire sad-looking province. On the way back to Toronto I’ll try to stop at Grasslands, though. I had my first walled/indoors/AC place in Regina, SK. Right next to a truck maintenance stop. It did the trick for a night – and an expensive night at that. A whole seventy dollars for one night in an Econo lodge vs the thirty-forty range for the campings. But there was a shower! That was nice. Good for the healing tattoo as well.

Entering Alberta I was allowed to camp again. The only sites I could get were at Spruce Coulee, at Cypress Hills park. Yet another dirt road. Sorry, car. This was a small oasis in otherwise barren prairie land. It had its own little climate. As a bonus I watched a prairie storm roll across the lands on the drive in. Amazing. Nothing like a big prairie storm, where you can see the entire thing from any distance away. An older couple adopted me for the two nights I was there and fed me free gin so that was nice. I only had to endure endless stories about various people in their lives. The lady also claimed I was a ‘Revelstoke girl’ so now I feel compelled to go to Revelstoke. It rained pretty hard during the first night despite any forecast for it. That was the first dip into ‘volatile weather that you can’t really predict’ in mountain-y areas. Despite it being Alberta, it was still a ‘prairies’ feel. 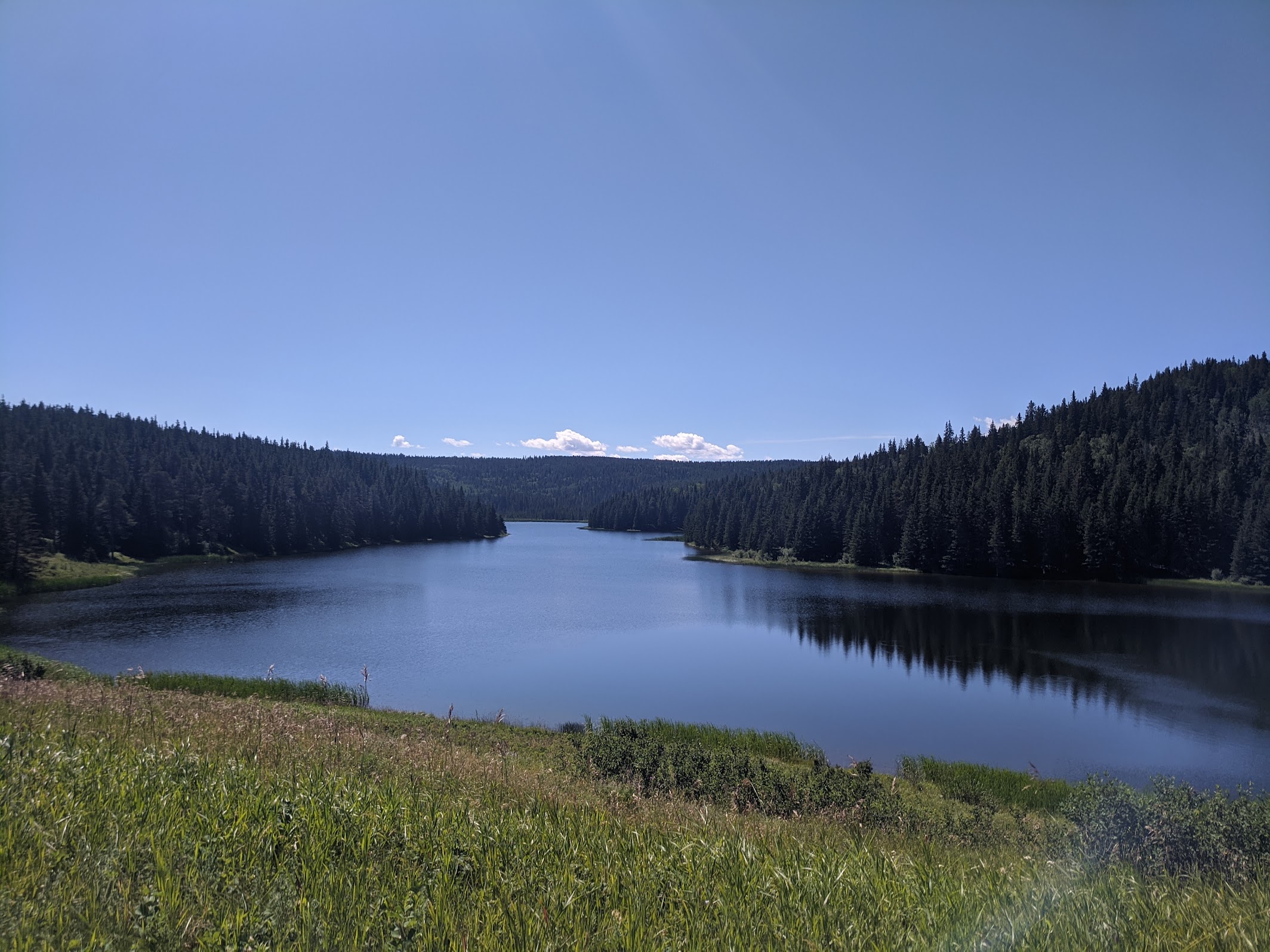 Next stop was Canmore. It was here that I finally made it to mountains. I definitely cried a bit in the car, and sent a pile of sunscreen into my eyes whilst driving. I’d been there around 15 years ago as part of a ‘western experience’ trip out of my high school with my friend Tim. Returning was jarring: what a darn tourist trap now. Under construction and overpriced. The hostel was pretty cute and fun. I also loved riding around on the bike here. This is also where I learned more about how Google maps doesn’t really take into account the dirt roads or just general impossible-ness depending on equipment. I started riding my smooth-tyred and road-ish bike through dirt roads totally meant for mountain bikes to the Ha Ling trailhead. Haaaaahaa what a mistake. When it was raining, I was alone, and about two-thirds of the way there, I decided it was getting pretty damn dangerous to be on my own. It is bear country afterall. And cougars. Ha Ling is also basically a stairclimber so riding forty-five mins uphill to hike 3 hours uphill was beyond the amount I had consumed in calories. I went back, ate some more food, then drove to hike it. Definitely glad I’m keeping fit: what a climb. The climate changed rapidly of course, and by the time I got to the saddle I was nearly blown over the ridge. I summited it enough for me. I was pretty concerned with actually getting blown over. The scrambles to the top were a bit wild as well. I sat on the ridge looking down at the town and ate a snack. It rained pretty hard coming back down so that made it pretty treacherous, again being alone. My number one ‘fear’ (though not really a fear) is being found in a dumb death kind of way: I fell or something. It’s statistically more likely than many other ways to die on a trail, but damn I would be so postmortem embarrassed if I was found just off a trail. Chilled in the hostel for a few more days and showered profusely to catch up from the other days.

Exiting the busy town of Canmore, Banff National park was next. I stayed for five nights and used the time to chill, in ‘Two Jack Main’ campground. I rode the bike to the nearby lakes and stared at mountain views for probably hours, also crying a bit the whole time, revelling in their relative permanence compared to many other impermanences of the planet. Unsure why mountains make me tear up. I’m even tearing up right now writing about them. The heck. The town of Banff was even worse than Canmore. It was convenient, though. I also enjoyed the wood/fire system at the park: you pay per night a ‘fire permit’ but then you can just take wood from a lot. It was nice dry pine so the fires smelled great and I had a fantastic time splitting the wood every night. That’s probably one of my favourite activities: splitting wood. Sometimes I wish I had a big axe, but the hatchet plus log-to-bash-with works great.

For some reason, which I think was ‘it’ll be fine lol’, I decided to book a backcountry trip right after the five nights in Banff. I forgot/didn’t pay attention to the drive from Banff to Jasper, which was around three hours, so I basically booked it to Jasper and landed on the ‘Saturday Night loop’ trail at three in the afternoon. Thinking I’d take a while to hike it with the elevation gain and never knowing my actual pace with the pack, I rushed. Made a ton of noise because big furry friends of course. Only two and a half hours to do ten kilometres so I was totally fine with daylight. Another couple was also there so the alone-ness was reduced. I don’t mind being backcountry not-alone in bear country at all. I also don’t smell very nice, so I am more ‘one with nature’. The loop hike was okay. I thought it would be super cool to stay at the Saturday night lake camp on… Saturday night. That’s as cool as I get. Both sites were kinda meh, and the trail was noted as moderate but pretty easy, except for the broken bridge across a large stream. Still do-able though.

The most badass looking mountains were on the way to Jasper, through the Columbia Icefields/parkway. I should note at this point, that despite being August, it’s somewhere between 5C and 10C every night. The car camping sleep system included a wool blanket and -10C bag already. During April lockdown I started a giant foot/calf sock for specifically the ‘fall and winter camping’. I finished The Sock in Banff and it’s been super useful the entire time. This thing plus the blanket then bag makes my feet super toasty. I brought both the blanket and sock on the backcountry despite the bulk and normally would never ever bring ‘so much’. It was well worth it. It’s probably the most joyous feeling to crawl into the bag + blanket + sock thing after a day of hiking and eating odd food. After dipping out of the backcountry I immediately went to a brewery which is almost tradition at this point. I needed to kill about three hours, so the Jasper Brewing restaurant was heavenly with their real food someone else made for me. My dinner the previous night was a can of tuna, beef jerky, and a trail bar thing. Sitting down some beers and a burger is always the greatest thing. A few hours later and I had my first shower in eight days.

I’m sitting at the hostel now, writing this with some free wine that was put in the donation box. Life isn’t much better than this. I’ve also been offered free laundry because someone has taken my bed and I’m slightly inconvenienced with sleeping in an upper bunk. They were also so receptive to my recommendation of a signal booster for wifi downstairs. People are so much nicer over here out west.

Overall, I would never recommend any of this to someone who likes comfort and showering everyday. But if you’re like me and enjoy living out of a tent and car for weeks on end without showering, and sometimes hiking hours to get to a campsite full of mosquitoes, let’s chat.

Currently: looking forward to the stays in Glacier National park (backcountry up a mountain to Hermit Meadows), Kootenay, then some cool hot springs place, planning the trip back to Toronto to deal with evicting items out of the storage locker, securing a place to live in west/north Vancouver, and thoroughly enjoying not having a place to live or a job right now. And staying the heck away from as many as people as possible.