This was an awesome trip inspired by two of my coworkers at the time, so thanks guys. It was well rounded with some comfortable city hosteling, long bus travel days, multi-day tramps as they’re called, lazy beach days, and pitching my tent on windy ocean sandbars. Oh, and a sky dive amongst some mountains in there.

At the recommendation of R from work, I first stopped in Rarotonga. This helped to break up the flights a bit. It was still 17 hours of pure flying time from YYZ-LAX-RAR. I landed at really early o-clock so the beach hostel I was staying at wasn’t open for many more hours. It’s island life: everyone is operating at island time.

It was a few more hours past the opening time of sitting in the 35C heat before I was shown my adorable little beach house. However, there was a mistake and this was only for one night. Totally bonus expensive room for a night? Sweet. The next room was just as good, still in its own little building. Just not facing the beach. I survived the additional 10ft to travel to the beach.

Highlights of the island were the beaches and my choice to ride a rental bicycle around the entire island. I didn’t really think about being on the west side of the island when I found what seemed to be the only hostel, so I’m glad I ended up there. The sunsets were unreal. 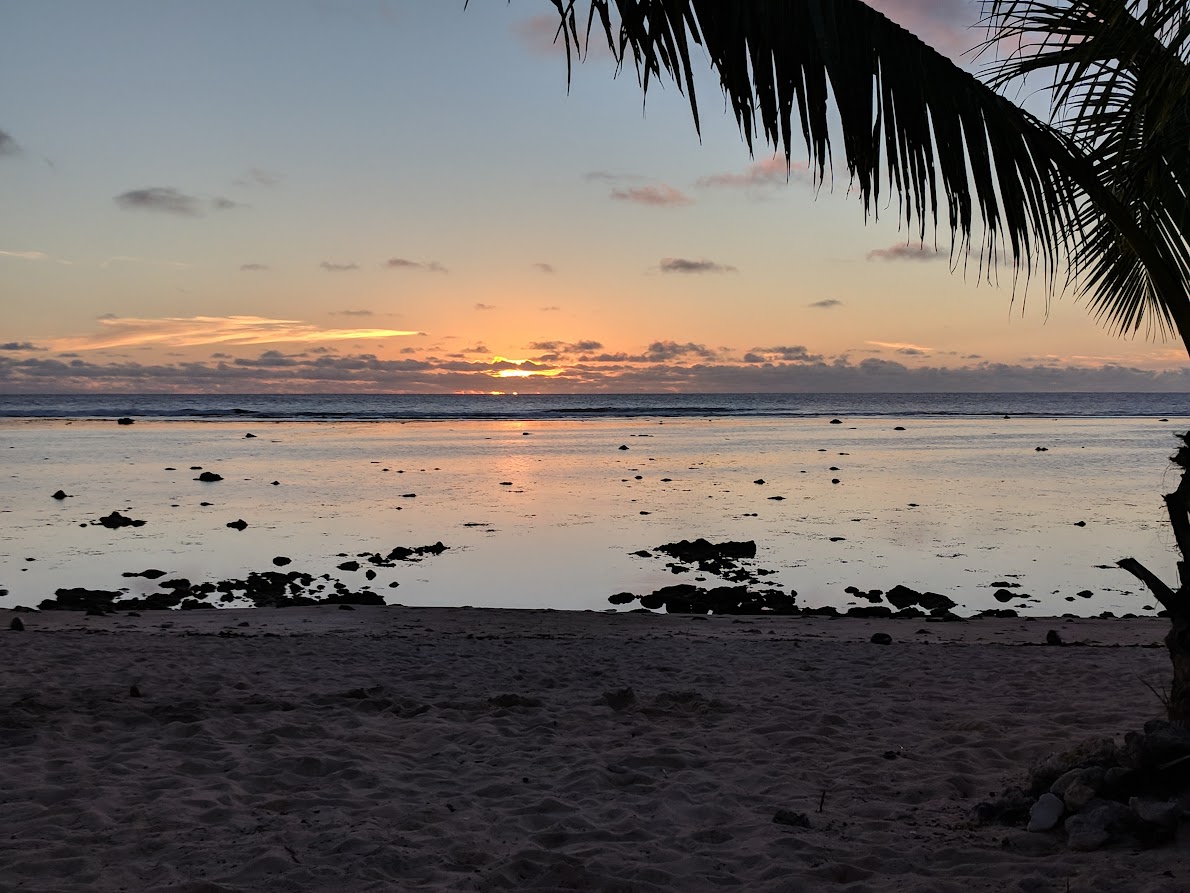 Around the whole island

There was an option to rent a bicycle nearby and it apparently only took a half day to get around the island. It took me four hours. My nether regions were unhappy with me after that. The ride around was amazing, and there were farms, busy towns, ports, and more beaches. I also learned that there was a grocery store not to far in the other direction I had been checking for where to buy food. In the last day of the trip I could upgrade from gas station to real store, yay. Around the island there were also water stations which were a lifesaver.

Since I knew I was going to be doing a three day tramp (hike) in New Zealand in a few days, I used this part of the trip to unplug from the internet and rest. I mostly read and napped by the beach, ate poorly, and kept to myself for the rest of the few days there. Except for the brutal bike ride day.

As usual my reservation is lost or something so my booked van ride to the airport turns into me generously tipping the hostel owner to let me on anyways. I rode in the back without a seat and seat belt. Why not.

Here’s a bunch of photos of the island, some furry friends, and some other random bits from that part of the trip. And more sunsets. And the sunrise on the first day is pretty nice too. And doggies!

The flight time to Auckland from Rarotonga was ‘only’ four hours. So short in comparison to the others. Landing in a city with more ‘modern’ or ‘western’ stuff was weird after being on an old school island for a few days. It was so much easier to get around and get internet to avoid getting totally lost.

In NZ they take contaminants very seriously. I cleaned my stuff extremely well, like they recommend, so I avoided having my boots/tent fumigated. I did have to completely unpack my pack, unroll my tent, and empty the pegs. An officer watched me the whole time, and sometimes helped tug something out from the bag. After the nod of approval, he simply folded his arms and stared away while I tried to stuff everything back in quickly. It was so perfectly packed. :(

Maori culture is rich and everywhere. I love it. There are the touristy looking things but they’re rare, and Maori as often the first language on signs. Which makes sense as all these places had Maori origins first. Kiwis are anyone who isn’t of Maori descent who is from/lives on the island.

In Auckland I stocked up on food and fuel for the first tramp, went on a boat, ziplined through a high canopy forest, visited some museums, and ate some more nutritious food so I don’t collapse day one of the hiketramp. Tramp. I bussed to a place called Napier by the ocean on the way to the first weird part of the trip.

I love that it’s called tramping. They’re also called ‘great walks’ if you’re speaking about the few in NZ that are every popular and busy.

The first one required a night on either side at a bushwhacking hostel. It would have been great if they let their patrons know that it would be impossible to get food. Grateful for always packing one extra day of food, I didn’t have two extra days. Oh well, that’s a problem for after the tramp around Lake Waikaremoana. Yeah, that was hard to say. Made it difficult to blend in. Though being much whiter than everyone else already had that effect. And the way I say “about”, apparently.

I shared a small house with three bedrooms with an older lady who was also doing the same track. It was a strange experience. I mostly tried to keep to myself but she really wanted to talk all the time. I hoped she wasn’t doing the exact same sites each night I was. I ate my first day of trail food that night.

The weather for day one wasn’t great and the owner of the ‘hostel’ I stayed at the backyard said there was no point in ascending the hill/mountainish thing I forget the name of. He offered to water taxi me to the site I was supposed to reach much later that afternoon – he was also the owner of the boat. I ended up setting up my tent, meeting the badass warden who had the coolest face tattoos I’ve ever seen, and then climbing up the mountain for the view. The view was an amazing bunch of fog. Couldn’t see a thing. Climbed back down.

The other days were awesome with minimal people. There was one night, I think the third, where I was totally alone. I was picked up by water taxi on the last day and brought back to the same backyard farm hostel. The wife of the owner made me a sandwich, which was super nice. It was also the most delicious food I had ever eaten in that moment. Next day she drove me back to town. 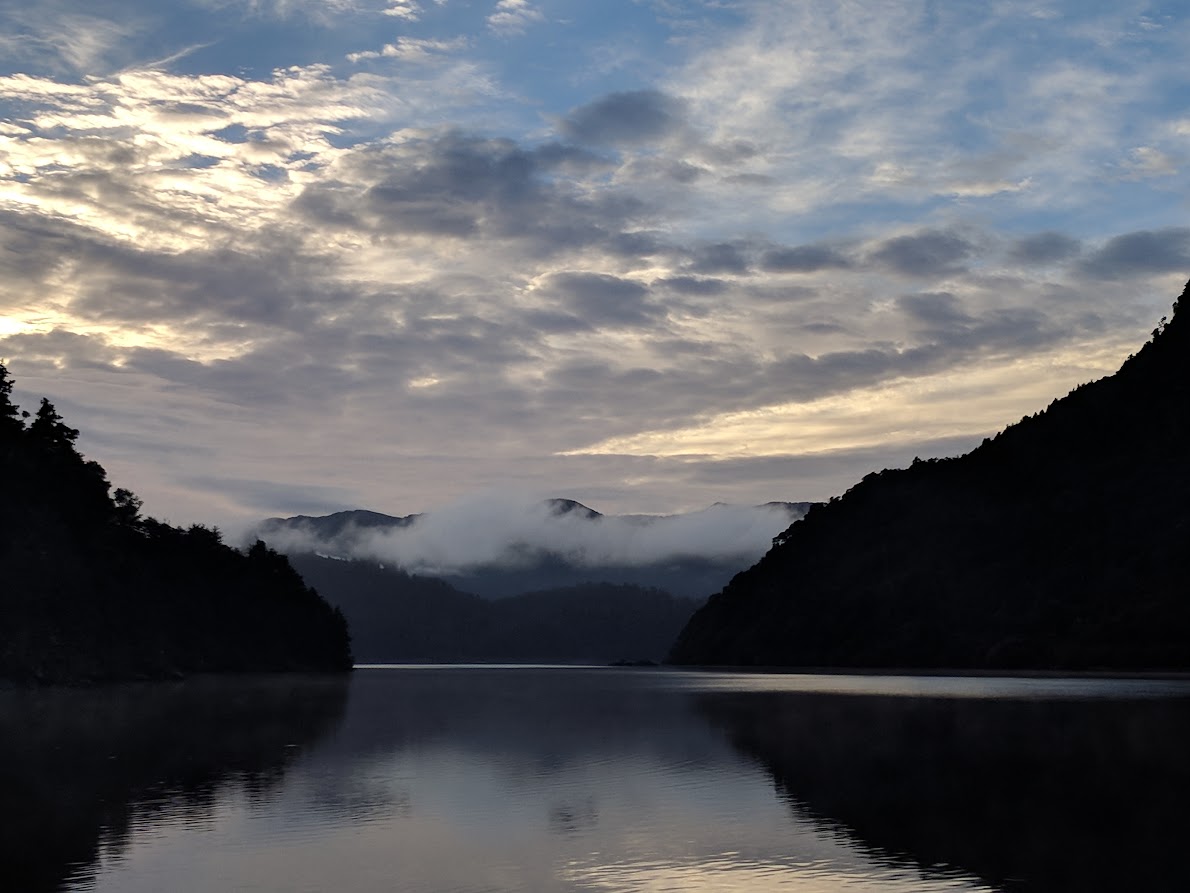 Photos for the hike

I’ll start with what I didn’t do: Hobbit/LotR stuff, and the more touristy natural destinations. I’ll go some other time. Pictures someone else took also suffice.

The ferry ride between Wellington and Picton was super nice. Wow. I can’t wait to go back someday to be in that landscape again. 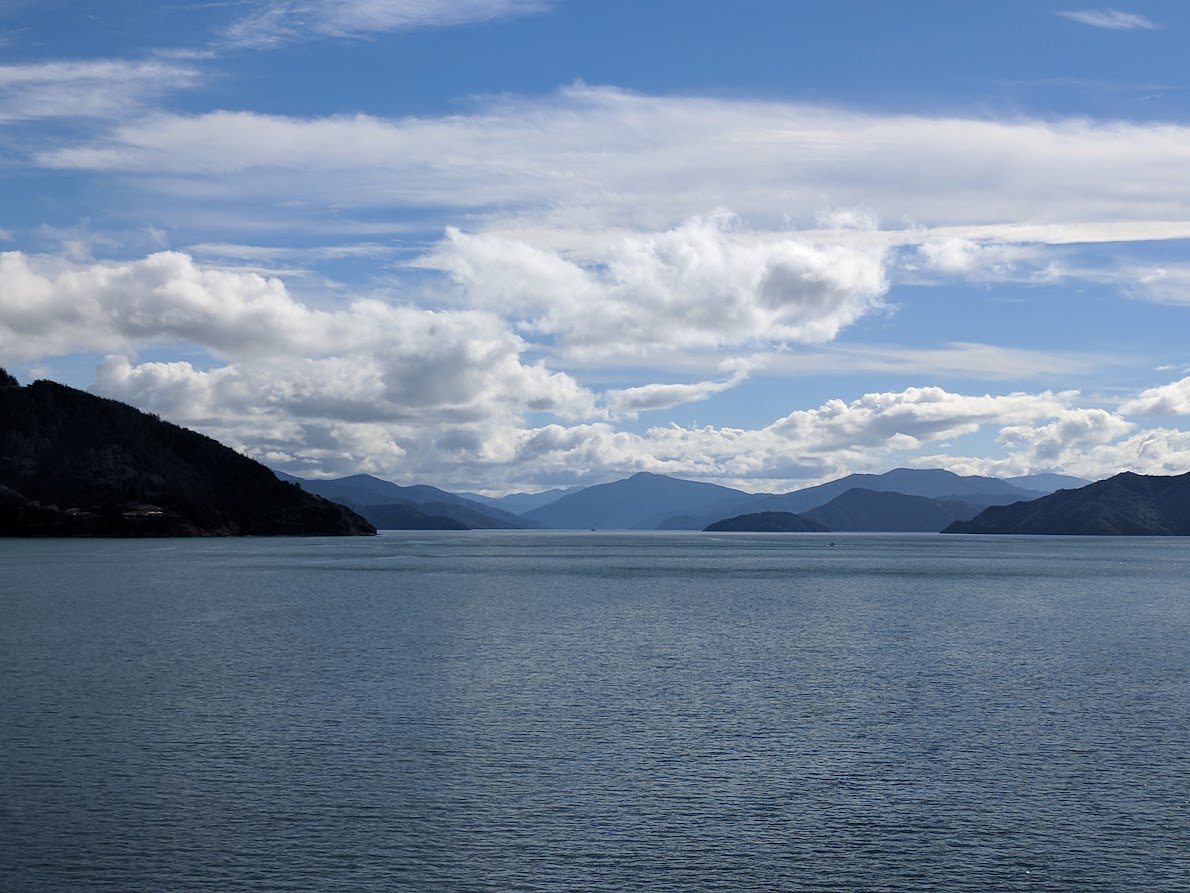 Picton was one night and then I bussed to Nelson, closer to the track, the next day. Nelson was much better for restocking. Canada might be ‘outdoorsy’ with MEC and whatnot, but the Kathmandus in NZ are everywhere. The whole country loves the outdoors. It’s great.

I did the track the opposite way most people do. I don’t recall exactly why, but it was much better this way. The ‘end’ of the track was my beginning, and from the ordering of the photos, the ‘end’ is much less exciting. There is a cool-looking gate thing, but nothing else. At the ‘beginning’ of the track, there is a restaurant and much more fanfare. I enjoyed the glass of wine and comfortable chairs at the end.

This was the best hike I’ve ever been on. By far. It was incredibly busy with all sorts of people at some points, but overall amazing. Great weather, and interesting terrain. Tenting along the golden beaches was a really nice way to sleep, hearing the ocean waves. I didn’t end up bringing enough food so by the last night it was a challenge waiting for dinner to rehydrate, and save enough for the next day. Why do I always pack such lame food for myself I’ll never know. 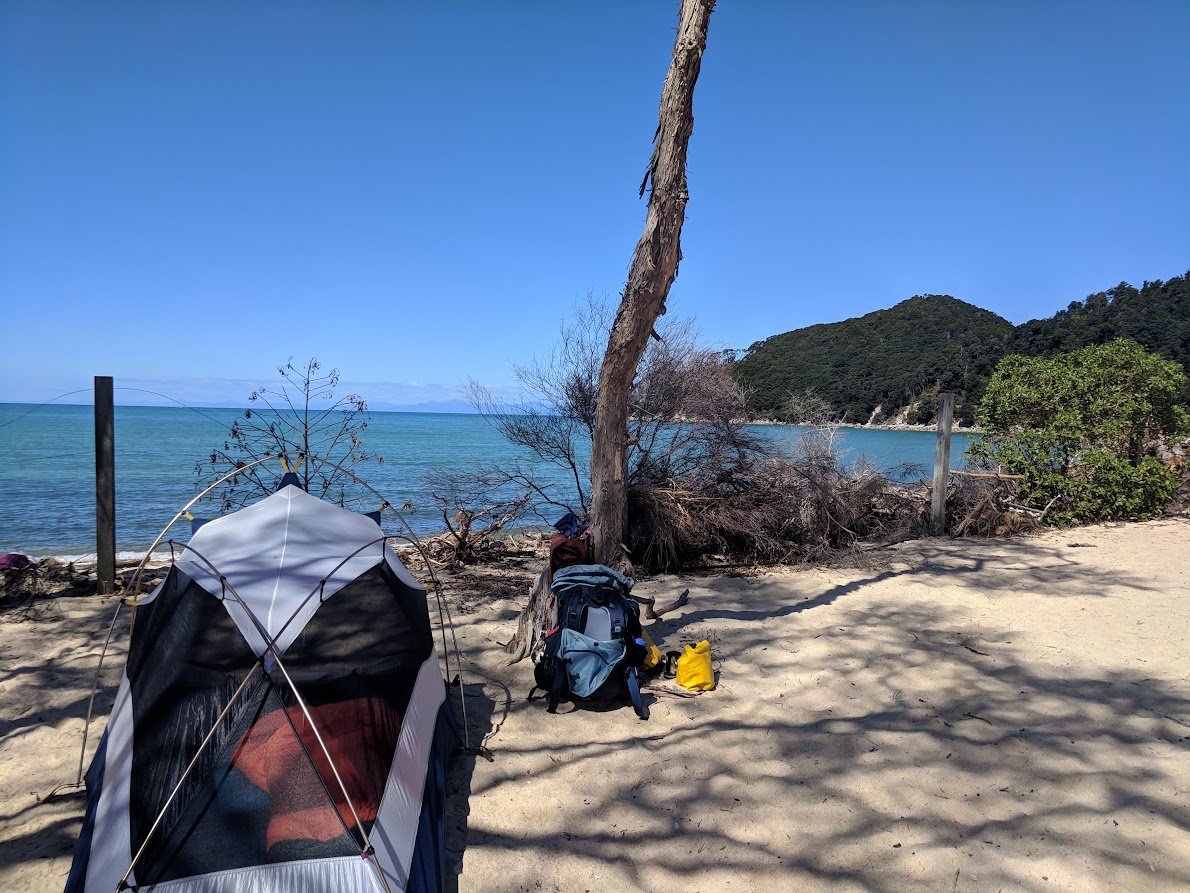 More photos of yet more sunsets, and the along the track.

By the time I was nearing the end of the month long trip, it was becoming autumn in Queenstown. I saw an advertisement for sky diving. The only other time I’ve been is in Switzerland, which I didn’t think you could top due to the mountains in that area. The south island NZ is just as mountainy though more… expansive?

I opted for the highest jump they’d let you do of course. Why jump out of a perfectly functioning plane if not at the highest altitude. The plane full of 10-12 people all left at around 10,000ft when I was the only one at 15,000ft. The waiver, as you’ll see in the photos, says I will be using an oxygen mask. It was attached to me, that’s for sure. In the air the guy strapped to me basically just chuckled and said we don’t use them. Cool. I like it.

It was a spectacular dive. Perfect weather, fun chatting with the dude I’m wearing like a backpack on the way down. That’s probably the most awkward part. What do you talk about when you spend 20mins strapped to a stranger and a parachute? Better than Switzerland at least, where my backpack didn’t speak much English, and wanted me to congratulate him on his first jump in the area. No pictures of the dive because I’m not paying that much money. Go on your own to get the experience :)

I stayed in Wanaka after the sky dive. Obligatory photo of the famous tree. I wonder how many shots of this tree exist. It wasn’t the brightest day out, which was totally fine with me. Cloudy is better. It at least makes me feel like I’m burning less. 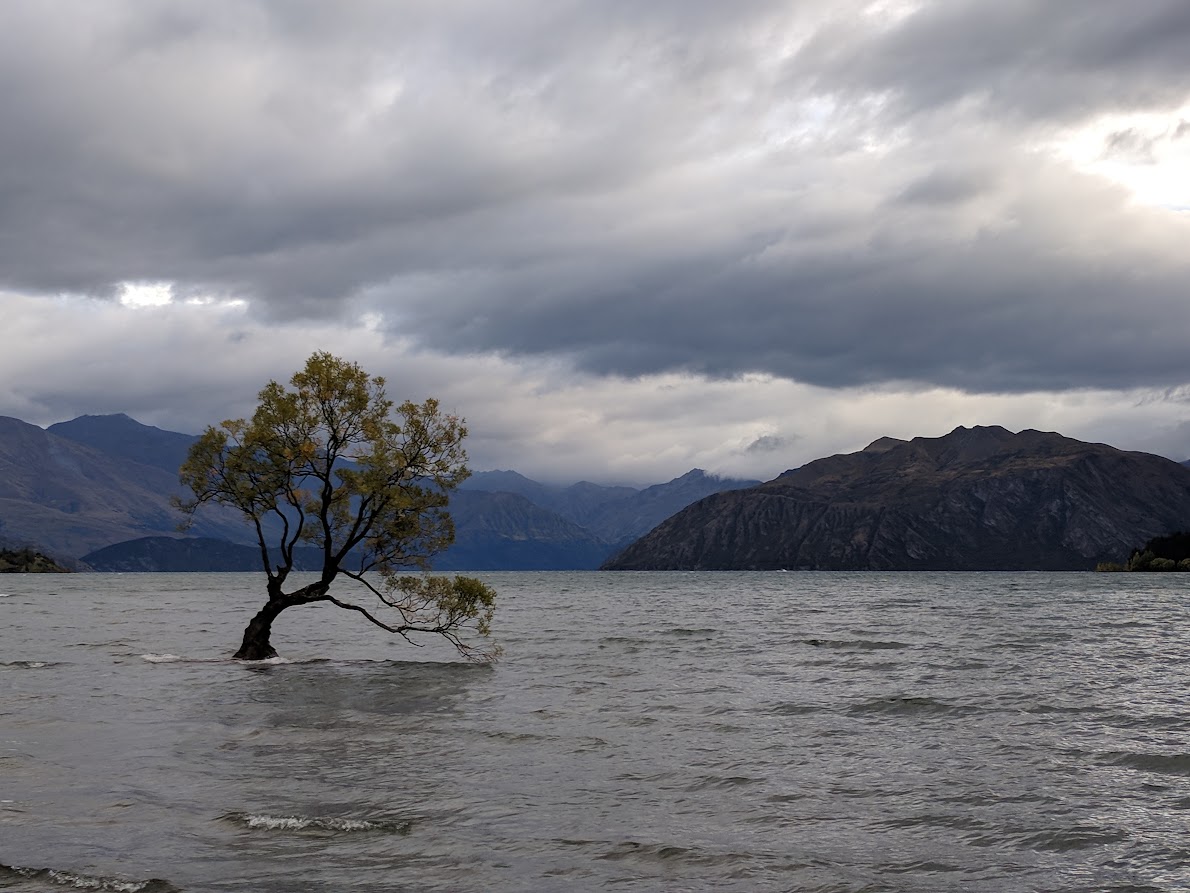 I also watched Black Panther in the coolest little movie theatre. All the seats were unique car seats from the forties onwards. Very classy. I didn’t bother bringing my phone to watch a movie so no photos. It was called Cinema Paradiso. The hostel was also really nice here, and inexpensive.

Would I go back?

Absolutely. A month wasn’t long enough. Despite it being a fairly small bunch of islands, there is so much to see and do. I could also do all the LotR stuff when back, though it seemed lame sometimes. I did learn that most of the filming happened on private property, which makes it even less exciting. Next time Milford Sound and the track along Mt Cook would be what I do. Want to go to NZ yourself and this kind of trip sounds fun to you? Tell me!

So many sunsets. Hope you’re ready. It’s not even all of them.